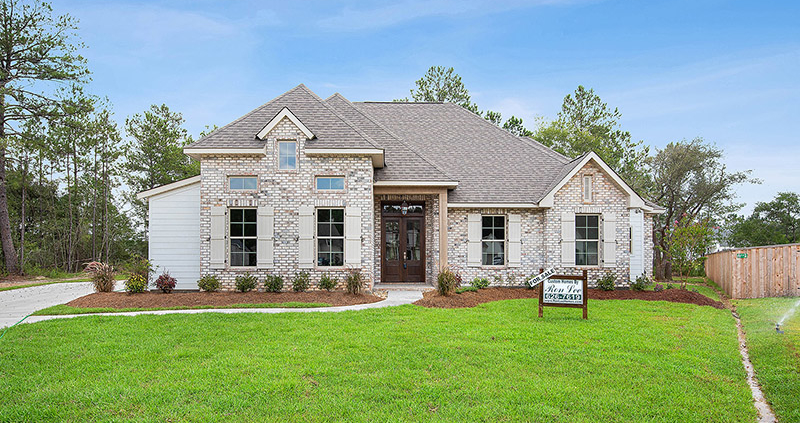 As a community starts to thrive and grow, more and more businesses and residents move into the area.  Along with new growth, comes new buildings and homes in the community. What about the existing buildings in the area that might have lost their tenants due to previous lack of growth?  An existing building is a perfect place for future business owners to begin a new business.  Adaptive reuse, the process of reusing an old site or building for a different or new business, is a great way to bring new life into an old building.

Currently under way, is the Rest Awhile restaurant complex.  Originally the

Rest Awhile building was the Frapart Hotel in the 1800’s which later became a retreat house for those in need. After Hurricane Katrina in 2005, the building was left abandoned and now the project is preserving the old building into a sit-down restaurant.  Two other buildings on the site include the Hadden Cottage, which plans to be a coffee and tapas bar and the Sophie B. Wright Cottage which plans to be a tavern.

The McGuire’s second project is close to Barrett’s heart. Band’s Food Store, in

Old Mandeville, was built in the 1940’s and served Old Mandeville for decades.  As a young boy, McGuire remembers sweeping the parking lot of the grocery store, located at Lafitte and Monroe, to earn money to buy baseball cards.  The couple purchased the site for $275,000 and hope to turn the building into a restaurant.  McGuire says they are focusing on “a lunch counter concept at this point” and as for the name, “we haven’t gotten that far yet,” he said.

Adaptive reuse is not only a smart and green way to reuse current buildings, but is also a great way to preserve a community’s memories and history. As for the McGuire’s belief on conserving the old grocery store site, “It’s a great little place. It deserves to be put back into commerce,” he said.

The St. Tammany Economic Development District is the forefront of St. Tammany’s economy. As stated on their site, the agency’s objective is to “seek to preserve and promote the quality of life by strengthening and supporting vibrant economies.” Businesses and Residence can follow the community’s economic development, successes and future opportunities found throughout St. Tammany via the agency.

St. Tammany is a great area to both live and work.  With the low cost of living and the strong business climate, the parish is on a growing trend and is home to industries that include advanced manufacturing, corporate headquarter offices, distribution and logistics, oil and gas, information technology, and healthcare and biosciences. The current population of 255,000 and civilian labor force of over 126,000 keeps this strong economy going.

District with a name change to “St. Tammany Corp.” and a new logo.

Masingill explained that along with the name change, the St. Tammany Corp. will have a new framework for how it handles business in the Parish. They will focus on many factors which include how the Parish’s various communities interact with each other to the role of government and tax incentives in economic development.

“This is not just an academic exercise,” Masingill said. “We’re looking at everything.”

A study will be conducted on how the agency wants to expand its “regional reach.” Masingill wants to establish a good working relationship with other agencies in the Parish, the economic development group Greater New Orleans Inc. and even over state lines.  The plan for the new framework is slated to be completed by year’s end.

Click here to view the source of the information. 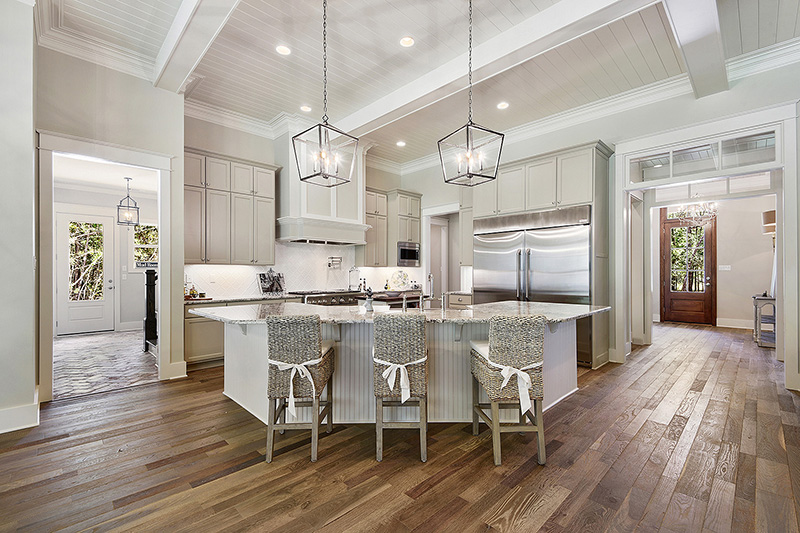 Because of the lopsided nature of supply and demand in real estate, home prices have not only continued to increase, but they are still increasing at a rapid pace. According to Core Logic, a real estate analysis company which tracks housing trends nationwide, the price of homes for sale increased by 6.8% in June, 2018, compared to June, 2017. May, 2014 was the last time that housing prices had such a high year-over-year percentage increase, which was during one of the fast-paced recovery years of real estate after the Recession.

The price of homes continuing to go up is unsustainable as mortgage rates are also on the rise, putting the cost of the

monthly note out of reach for some home buyers. However, as long as demand continues to outpace supply, the prices will continue to have a “seller’s market” mentality for home buyers who are able to qualify for loans.

Another factor in the increase in home prices is that prices are now double that of the growth of individual’s growth in salary. However, there are signs that home prices will start to see a slow down as the S&P/Case-Shiller 20-city index had less growth during May, 2018 than May, 2017. There are also other trends that show an overall economic slowdown that have probably not translated to the real estate housing market just yet.

What you can take away from this news is that if you have a home to sell and are wanting to buy a new home or a home for sale, you will want to make sure you are able to move quickly on buying a home and actually moving out since it truly is a seller’s market out there. If you are buying a home in the St. Tammany Parish area, Contact Ron Lee Homes about our Homes for Sale or to build the home of your dreams in Mandeville, Madisonville, Covington, Abita Springs, or Folsom! Call 985-626-7619 or email Info@RonLeeHomes.com.

While You Are Out Touring New Homes for Sale This Weekend, Stop By River Club, a New Waterfront Community in Covington!

CLICK HERE TO VIEW A SPECIAL NEW HOME BUYER INCENTIVE
ON THIS NEW HOME FOR SALE! 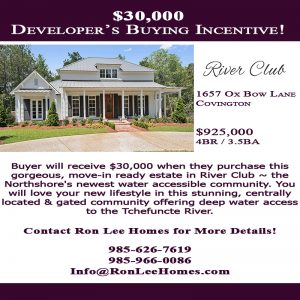 For More Information About the Features of This New Home for Sale, Contact Ron Lee Homes at 985-966-0086 or E-mail Info@RonLeeHomes.com.

THIS NEW HOME FOR SALE FEATURES THE FOLLOWING AWARDS!

While You Are Out Touring New Homes for Sale This Weekend, Stop By River Club, a New Waterfront Community in Covington!

CLICK HERE TO VIEW A SPECIAL NEW HOME BUYER INCENTIVE
ON THIS NEW HOME FOR SALE!

For More Information About the Features of This New Home for Sale, Contact Ron Lee Homes at 985-966-0086 or E-mail Info@RonLeeHomes.com.

THIS NEW HOME FOR SALE FEATURES THE FOLLOWING AWARDS! 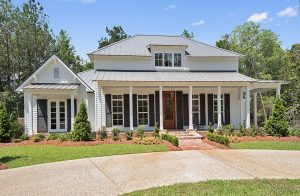 CLICK HERE FOR MORE INFORMATION ABOUT THIS NEW, CUSTOM HOME FOR SALE! 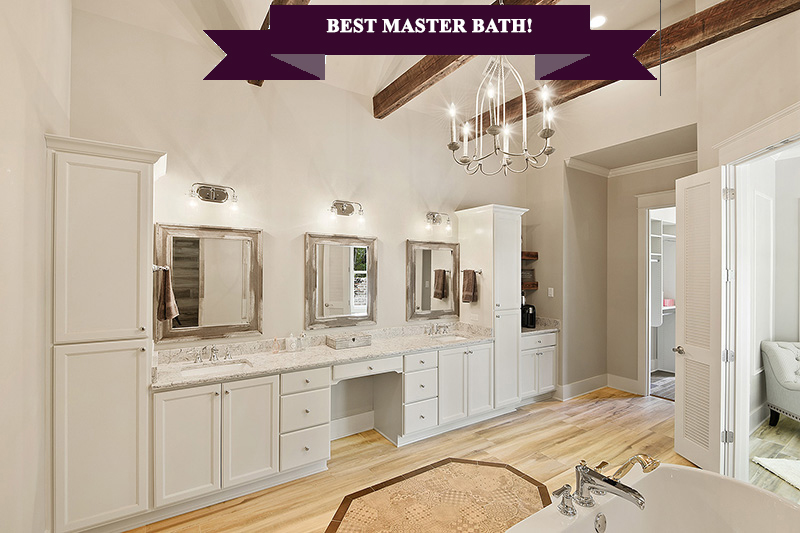 TOUR OUR MOST RECENT PARADE OF HOMES HOUSE AT RIVER CLUB!

DUE TO INCLEMENT WEATHER, THIS OPEN HOUSE HAS BEEN CANCELLED. 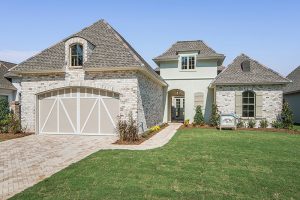 Click Here for More Information About This New, Custom Home for Sale!

Click Here for More Information About This New, Custom Home for Sale!