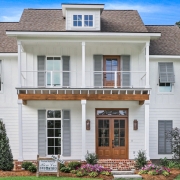 The first two months of 2021 not only saw a strong housing market but 164,901 single-family permits issued year-to-date (YTD). The report shows that there is a 16.6% increase over February 2020.

Permits for residential single-family and multi-family 12 months change February 2021 year-to-date is different throughout each U.S. region. Single-family permits and multi-family permits increased in all four regions in February. For single-family Midwest had an increase of 24%, in the Northeast a 20.1% increase, the South had a 16.2% increase and the West came in last with a 13.6% increase. Multi-family saw the biggest increase in the West at 22%, next the South with an 18.4% increase, Northeast at 17.5% and the Midwest saw the lowest at only a 5.4% increase.

Multi-family permits issued across the country in February 2021 YTD reached 83,110 which was 17.7% more than the reported 70,635 in February 2020. Thirty-six states and the District of Columbia had an increase while 14 states had a decline. The highest increase was seen in New Mexico with a 714.3% increase and Nebraska saw a huge decline of 66.9%. The ten states that had the highest number issued accounted for 66.4% of the total.

There Are Tons of Financial Benefits in Homeownership